Philanthropy: What it's all about.
Outcomes and effective altruism

Effective altruism is a philosophy and social movement that applies evidence and reason to determine the most effective ways to improve the world. Effective altruists aim to consider all causes and actions, and then act in the way that brings about the greatest positive impact.[1] It is this broad, scientific approach that distinguishes effective altruism from traditional altruism or charity. While a substantial proportion of effective altruists have focused on the nonprofit sector, the philosophy of effective altruism applies much more broadly, e.g., to prioritizing the scientific projects, companies, and policy initiatives which can be estimated to save and improve the most lives.[2] Notable people associated with the movement include philosopher Peter Singer,[3] Facebook cofounder Dustin Moskovitz,[4] Oxford based philosopher William MacAskill[5] and researcher Toby Ord.[6] The movement is made up of many chapters and organizations[8] around the world.
(source: Wikipedia; read more)

Every day, most of us do something morally indefensible — we go about our lives without sending help to the 6.9 million children under the age of 5 who will die this year from poverty-related disease. In the video, philosopher Peter Singer makes the case that ignoring these kids is as inhumane as ignoring a child who’s been hit by a car on the street in front of you.
Peter Singer: The why and how of effective altruism: “Does it really matter that they’re far away?” asks Singer. “I don’t think it does make a morally relevant difference — the fact that they’re not right in front of us, or the fact that they’re of a different nationality or race.”

Peter Singer states that effective altruism begins with reason – the realization that all lives are of equal value — and looking for charities that affect the most lives, the most effectively.
Elsewhere Singer states that "all lives", human animals and non-human animals, are on a 'scale of being' in which "equal value" is less equal dependent upon the amount of pain recepters and degree of consiousness. This principle is also applied, he says, when eating or killing human animals (see the video: how the atheists Singer and Dawkins talk rubbish). Like John Lennox (see video debate below) who applauds Singer's ethics of proximety but is in fundamenal disagreement with his presuppositions, so too ARK AID. 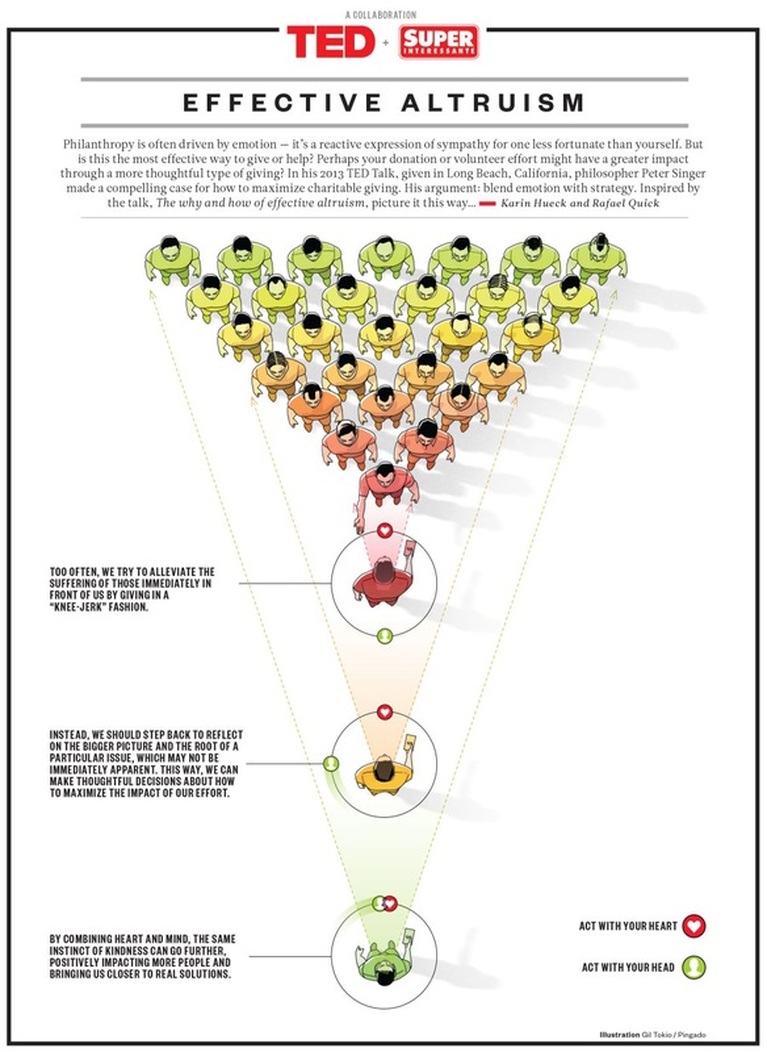 Almost all of us want to make a difference in our lives. So we give to charity, recycle, volunteer, or cut down our carbon emissions. But are we getting it right? In a world where ever more data is available, shouldn’t we be paying closer attention to the measurable effects of our altruistic actions? Why, for example do we spend so much time and effort researching hotels and restaurants online while we rarely bother to investigate the effectiveness of the charities we donate to? Are we more concerned with feeling good about ourselves than actually doing good?
Enter William MacAskill, rising star philosopher at Oxford University and co-founder of the Effective Altruism movement. MacAskill’s new book Doing Good Better has won acclaim from the likes of Peter Singer and Steven Pinker. Bill Gates, perhaps the world’s greatest philanthropist, has even described him as ‘a data nerd after my own heart.’ By crunching the numbers, MacAskill has shown that the standard ways of doing good often turn out to be less effective than we think. For example:We need to be more rational and savvy, MacAskill argues, when it comes to giving, and we need to be willing to accept that the best ways to do good are often counterintuitive: If you want to reduce your carbon footprint, he claims, rather than buy local produce you should donate to offsetting charities. If you want to reduce animal suffering, you should first stop eating chicken, not beef. When choosing your career, working for a non-profit isn’t necessarily the most altruistic choice: you can achieve more good over your lifetime by taking a highly-paid job and donating a chunk of your earnings to worthwhile causes. And in order to have the biggest impact, forget the maxim that charity begins at home: you should give money to organisations that save lives in the developing world rather than those that help people at the bottom of the pile in your own rich country.
But not everyone agrees with MacAskill’s utilitarian approach to altruism. Sharing the stage with him in this Intelligence Squared event will be priest and philosopher Giles Fraser. To Fraser, the important point is that we are people, not algorithms, and our personal attachments and loyalties are an important part of our identities. So if it comes a choice between spending a few hours consoling a bereaved friend, or using that time to earn money to give to a good cause, don’t the fundamental requirements of kindness and empathy – the qualities that make us human – make consoling the friend the correct ethical choice? And can it really be right for an individual to choose a dispiriting but lucrative career spanning decades in order to fund a deworming initiative in Africa?
These are some of the ethical challenges that BBC business editor Kamal Ahmed steered our speakers through. In the front row we had heads of charities, philosophers and philanthropists to take part in the discussion.

William MacAskill Associate Professor of Philosophy at the University of Oxford, co-founder of the Effective Altruism movement, and co-founder of the non-profits Giving What We Can and 80,000 Hours, which inspire people to use their time and money as effectively as possible to fight the world’s most pressing problems. He has pledged to donate everything he earns above £20,000 to whatever organisations he believes will do the most good.
source

The following are some notable lectures, debates, and information from some key sources involved in the search for better outcomes as a key way to understanding what the better charities are.